(Hebrews 12:1 NLT)  Therefore, since we are surrounded by such a huge crowd of witnesses to the life of faith, let us strip off every weight that slows us down, especially the sin that so easily trips us up. And let us run with endurance the race God has set before us.

(I Samuel 1:6-8 NLT)  So Peninnah would taunt Hannah and make fun of her because the LORD had kept her from having children. Year after year it was the same–Peninnah would taunt Hannah as they went to the Tabernacle. Each time, Hannah would be reduced to tears and would not even eat.  “Why are you crying, Hannah?” Elkanah would ask. “Why aren’t you eating? Why be downhearted just because you have no children? You have me–isn’t that better than having ten sons?”

(1 Samuel 1:9-10 NLT)  Once after a sacrificial meal at Shiloh, Hannah got up and went to pray. Eli the priest was sitting at his customary place beside the entrance of the Tabernacle.  Hannah was in deep anguish, crying bitterly as she prayed to the LORD.

(1 Samuel 1: 12-14 NLT)  As she was praying to the LORD, Eli watched her. 13 Seeing her lips moving but hearing no sound, he thought she had been drinking.  “Must you come here drunk?” he demanded. “Throw away your wine!”

*GO TO GOD FIRST and GO IN FAITH!

(1 Samuel 3:1 NLT)  Meanwhile, the boy Samuel served the LORD by assisting Eli. Now in those days messages from the LORD were very rare, and visions were quite uncommon.

(1 Samuel 3:19-20 NLT)  As Samuel grew up, the LORD was with him, and everything Samuel said proved to be reliable.  And all Israel, from Dan in the north to Beersheba in the south, knew that Samuel was confirmed as a prophet of the LORD. 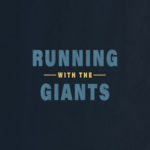 Running with The Giants 2021
Hannah