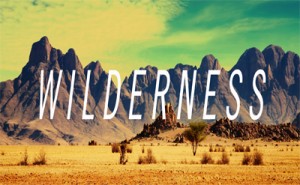 (Psalms 106:5 NLT) Let me share in the prosperity of your chosen ones. Let me rejoice in the joy of your people; let me praise you with those who are your heritage.

√ Problem: We carry a DREAM & never fulfill our DESTINY!

(ROMANS 8:29-30 MSG) God knew what he was doing from the very beginning. He decided from the outset to shape the lives of those who love him along the same lines as the life of his Son. The Son stands first in the line of humanity he restored. We see the original and intended shape of our lives there in him. After God made that decision of what his children should be like, he followed it up by calling people by name. After he called them by name, he set them on a solid basis with himself. And then, after getting them established, he stayed with them to the end, gloriously completing what he had begun.

√ How do I get from the WILDERNESS to my DESTINY?

(Genesis 37:15 NLT) When he arrived there, a man from the area noticed him wandering around the countryside. “What are you looking for?” he asked.

√ Fulfillment always lies with in RELATIONSHIP.

(Psalms 92:13 NKJV) Those who are planted in the house of the LORD Shall flourish in the courts of our God.

(Genesis 37:17 NLT) “Yes,” the man told him. “They have moved on from here, but I heard them say, ‘Let’s go on to Dothan.'” So Joseph followed his brothers to Dothan and found them there.

(Genesis 37:20 NLT) “Come on, let’s kill him and throw him into one of these cisterns. We can tell our father, ‘A wild animal has eaten him.’ Then we’ll see what becomes of his dreams!”

(Genesis 37:23-24 NLT) So when Joseph arrived, his brothers ripped off the beautiful robe he was wearing. Then they grabbed him and threw him into the cistern. Now the cistern was empty; there was no water in it.

√ The POSITION of the pit.

(John 3:17 NKJV) “For God DID NOT send His Son into the world to condemn the world, but that the world through Him might be saved.

√ Conviction points me to REPENTANCE.

(John 16:8 NLT) And when he comes, he will convict the world of its sin, and of God’s righteousness, and of the coming judgment.

(John 16:13 NLT) When the Spirit of truth comes, HE  will guide you into all truth. He will not speak on his own but will tell you what he has heard. He will tell you about the future.

(Genesis 37:31-33 NLT) Then the brothers killed a young goat and dipped Joseph’s robe in its blood. They sent the beautiful robe to their father with this message: “Look at what we found. Doesn’t this robe belong to your son?” Their father recognized it immediately. “Yes,” he said, “it is my son’s robe. A wild animal must have eaten him. Joseph has clearly been torn to pieces!”

√ The DECEPTION of the pit.

√ The PURPOSE of the pit.

(Psalm 16:10 NLT) For you will not leave my soul among the dead or allow your holy one to rot in the grave.

(Psalms 57:2 NLT) I cry out to God Most High, to God who will fulfill his purpose for me.

(Romans 8:28 NLT) And we know that God causes everything to work together for the good of those who love God and are called according to his purpose for them.

√ His PURPOSE leads me out!